Bowers Honored Above Rest of State

Our school board president Is board member of the year! And this is not just a local awar 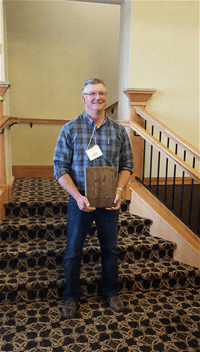 d, it is a state-level honor given by the Nebraska Rural Community Schools Association.

On Friday, March 18th, Duane Bowers, Arnold School Board President, won the NRCSA award for School Board Member of the Year.

Clayton Waddle, principal-superintendent of Stapleton Public Schools, presented the award to Bowers who was sitting unknowingly in the audience.

To quote his letters of recommendation, Waddle stated that Bowers was “described as someone who is a decent man and honorable public servant, he is also modest, humble, fair-minded and naturally thinks about others, the other guy, and the other side of the coin. He has instincts that are always in play making him someone people defer to, seek out, and trust. He is very dedicated to the school. He attends every school activity, from athletic to school music programs, even though his children have all graduated.”

Bowers was also commended on his no-nonsense style of running board meetings and for “gives members of the public their time to speak and respects all opinions presented. He gathers information before meetings and attempts to make sense of every situation before he makes a recommendation.”

Bowers is also respected by the teachers in the school. One teacher said, “He is a perfect example of a great board member. He spends hours standing over a hot grill cooking burgers and hotdogs at many community activities, he fund raises for church and community projects, and he is even credited with helping start the school’s booster club. He listens, collaborates, and stands up for the right thing to do in order to make our school the best possible.”

Bowers is “a former prom king, lifelong resident, booster club member, deacon, school board member, farmer and rancher – he is one of those rare men about whom it is impossible to hear anything but praise from folks down at the local café, the church congregation, the booster club gatherings, committee room, the sale barn, or the school’s hallways.” Congratulations Duane Bowers on a well-deserved award.

The mission of Arnold Public Schools is to educate students to meet the ever-changing demands of society. 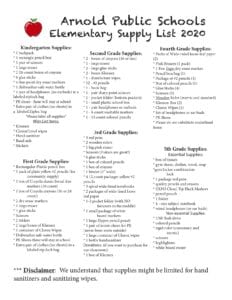 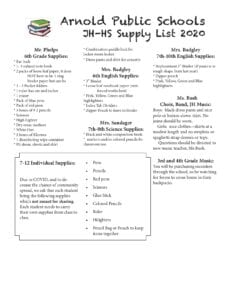 Here is a PDF of the School Supply List for everyone to print for shopping.

Activities for the week of March 9th:

Activities Calendar at A Glance